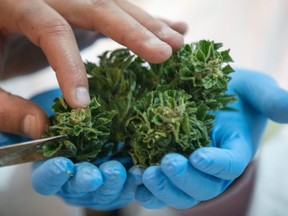 “We present medicinal cannabis as an alternative, potentially effective class of treatment.”

The study involved 115 chronic pain sufferers with intractable pain who had used opioids for at least six months prior to starting medical cannabis therapy. Photo by JACK GUEZ/AFP/Getty Images

A new study has found that medicinal cannabis may reduce opioid addiction for people with chronic pain.

Researchers found that medical cannabis treatment in their clinical setting “resulted in a significant reduction in chronic opioid use in the majority of patients with chronic pain,” according to NORML.

A study of 37 patients conducted at Harvard last year also found that cannabis can be an effective treatment option for chronic pain sufferers.

Earlier this month, the U.S. Food and Drug Administration (FDA) approved a clinical trial for a CBD-based drug to treat opioid use disorders.

The CBD drug Nantheia ATL5 was developed by US biotech company Ananda Scientific and the study is being led by UCLA professors Edythe London and Richard De La Garza II.

In a statement, London said that “the clinical trial is an important milestone in our ongoing research into therapeutic alternatives for opioid use disorders and reversing the impact of the opioid epidemic.”

We apologize, but this video could not be loaded.

Subscribe to Weekend Dispensary, a new weekly newsletter from The GrowthOp.

Meet some of the women powering New Mexico’s cannabis industry

This Phoenix Dispensary Is Giving a Free Edible to Vaccinated Customers